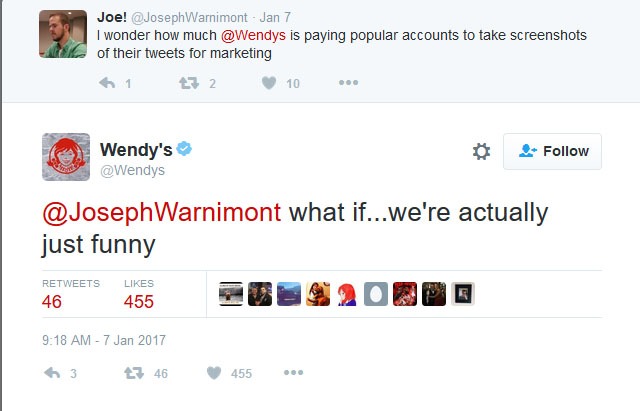 Wendy’s fast-food chain has been the darling of the Twitter world this week. After a particularly salty reply (see what I did there?) to a troller, citizens of the Twittersphere have been begging Wendy’s to roast them, write their bios, throw memes at them, and respond to random questions — which Wendy’s is actually doing with humor and sass while still keeping up with its customer service and marketing duties.

We’ve written recently about how important it is to inject personality into your social media marketing. People want to know there are actual human beings behind the posts they see, and respond better to fresh, custom-created content. Dry marketing content is just boring, so the more you can let your personality shine through, the better.

But should you mimic Wendy’s sassy, no-holds-barred approach? Should you “roast” your followers? Probably not. Wendy’s is a national franchise with a dedicated following. They’re not likely to lose market shares because they inject a little sarcasm into their responses to customers. Can you say the same? Again, probably not. If you’re a small, local company, sarcasm probably won’t serve you well in customer interactions. Unless you’re highly visible with a dedicated following, such behavior could easily backfire.

As Mashable reported recently, the mastermind behind Wendy’s Twitter account is Amy Brown, an experienced social media expert. She’s one of a team of social media managers who maintain the busy social media account. Wendy’s knew her penchant for humor when they hired her, and she’s clearly a naturally funny person. The attitude displayed by Wendy’s recent Tweets is not easily replicated, and definitely shouldn’t be tried by someone who isn’t well-versed in the social media game. Brown understands the power of injecting personality and humor into a giant franchise – it differentiates Wendy’s in the fairly crowded fast-food arena. That is a take-away we can get behind.

As we have said before, personality will set you apart from competitors. A sense of humor is never a bad thing, and using it on social media is a great tactic. But beware of crossing a line you can’t uncross. Thinking on the love that Wendy’s has earned this week, I can’t help but remember a Twitter debacle McDonald’s had a few years back. You’ve got to be careful what you ask for when you engage your following on social media. 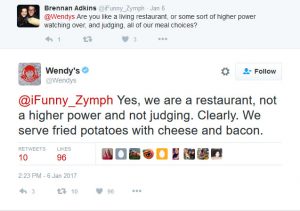 Wendy’s is playing to its audience, not begging for attention but not shying away from it either. Also, the bulk of their Twitter activity is still customer-service related – answering questions about their products, responding to complaints, thanking people for their loyalty. The humor is the Sriracha sauce on the fries of their day to day customer service-based activity.

Social media management should be carefully planned and executed by professionals. It’s not enough to just be snarky on Twitter, you have to follow through with exceptional customer service as well. Until you’re confident enough that you can handle the heat that comes with a show of attitude, let your personality shine through in more manageable, pallatable ways that represent your company in the best light.